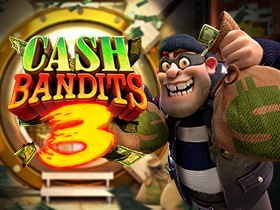 Experience the rewards found in the bonus round in Cash Bandits 3. This robbery-themed 5 reel video slot has one of the best bonus games available. Substantial multipliers and free spins are all part of the interactive bonus game that’s fun to play and exciting to win.
PLAY FOR REAL MONEY

The Cash Bandits 3 paytable may have the main prizes, but there are also two jackpots. Both the minor and major jackpots are awarded randomly. You’ll see the screen award one of the jackpots if you’re randomly chosen as the winner. The jackpot prize is added to your other wins.

The robber has the highest payout. If five of these wild symbols fill an active payline, you’ll win 5,000 coins. He pays a prize of 10 coins with two matches. Here are the other payouts from the highest to the lowest.

Winning combinations are formed from left to right on one of the 25 paylines. The only exception to this is the bonus slot’s scatter symbol. If you have at least three of them, you win some cash.

The Cash Bandits 3 logo is the scatter that triggers the pick ’em bonus round. It also pays a prize of 2, 20, or 50 times your total bet depending on if you get it three, four, or five times anywhere on the reels. While that cash reward is intriguing, the bonus round is the reason you want to see this scatter hit the reels as often as possible.

The Safecracking Bonus Round

Three, four, or five Cash Bandits 3 logos triggers the bonus round. Six safes await your safecracking skills. Choose digits 0 to 9 from the keypad and try to crack the combinations and open those safes. Your initial bonus is 5 free spins and 2x multiplier plus as many as 8 choices from the keypad.

Play for fun or play for real money. Cash Bandits 3 is set up for quick loading in instant play casinos or mobile phones and tablets.