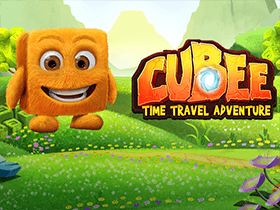 Cubee Time Travel Adventure is a floating symbols slot game featuring the adorable fuzzy cube. Cubee travels through time defeating his enemies in order to achieve his goal of multiple free spins with an attached multiplier. What you win depends on how well you do against the pirates and Vikings. 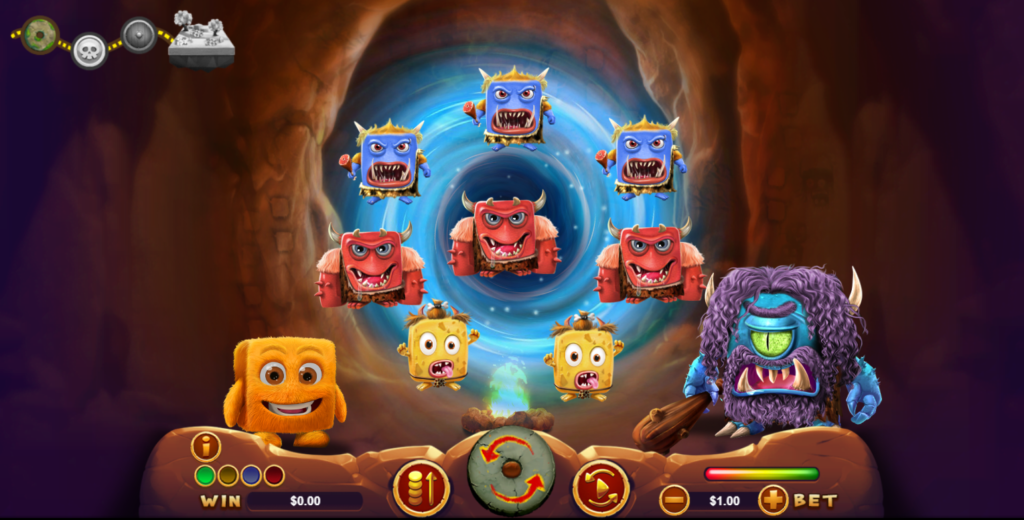 Where does Cubee travel? He starts in the Stone Age. From there, he goes to the Era of Piracy, the Viking Age, and Cubeeland. Cubeeland hosts the free spins bonus round. Once you’ve played that, you return to the beginning.

Once you spin, the time travel portal opens up and reveals several symbols. There are enemies that Cubee can devour, energy balls, or weapons. The enemies are Casper (green), Spike (yellow), Lucifer (blue), and Bones (red).

The most important thing to understand is that Cubee can only eat Casper if he hasn’t powered up. To devour Spike, Cubee would also need an energy ball to appear. Two energy balls open the door to devouring Lucifer. Three energy balls are the only way he’ll devour Bones.

On the right side of the screen is Cubee’s arch-enemy Rocco. Weapons are used to attack him. Once he’s defeated, Cubee time travels to the next age. Some of the ages play an important part in the final bonus round.

The Paytable and Payouts

Cubee Time Travel Adventure has a very easy-to-read paytable. It all depends on how many enemies Cubee can munch. The payouts don’t change depending on who he devours. It all comes down to how many he eats. Prizes are:

Energy Ball symbols are the power-ups Cubee needs to be able to devour the tougher enemies. Most of the time, Cubee is limited to devouring the green Casper. When energy balls appear in the time portal, he will power up and devour the tougher enemies. If you have three Casper, an energy ball, and two Spike symbols, that would be six symbols for a payout of five times your bet. Include the energy ball in the winning combination.

The Free Spins Bonus Round in Cubeeland

In the Era of Piracy, the time portal may reveal cannonballs. When they appear, they go into a counter. That counter ends up being the number of free spins you get in the bonus round. The Viking Age has arrows as the bonus symbol. Those arrows become your multiplier.

How much can you win? The highest possible payout is 50,000 times your bet. Cubee Time Travel Adventure isn’t your average slot. Once you get used to the gameplay, this floating symbols slot becomes one of the most rewarding casino games you’ll come across.