Diamond Fiesta pokies celebrates Day of the Dead with bonus features like expanding reels with jackpot diamonds. Win one of four jackpots or free spins. This 5 reel bonus pokie has 50 paylines and coin values of a penny to $1. 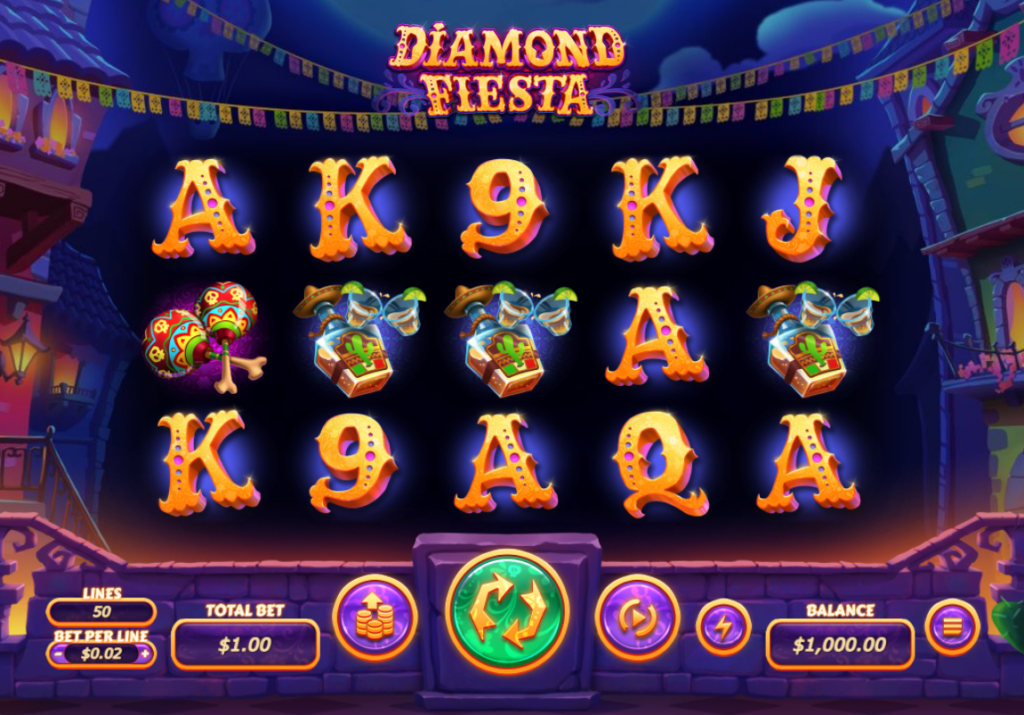 To play for fun or real money, choose your bet and spin the reels. Autoplay is available and lightning bolts set the game speed to turbo mode. Once you spin the reels, here’s what you can win.

The Skull Scatter pays up to 100 times your bet. You need at least three of these skulls on the reels to win a prize. The other bonus symbol is Senor Skeleton. He’s a wild found on the second, third, fourth, and fifth reels and helps form winning combinations.

This leaves one more symbol in Diamond Fiesta. There’s also a Diamond symbol that triggers the Jackpot Diamond Feature.

At the end of your spin, see if there are six or more diamonds on the reels. If there are, you win three respins. In those respins, the four corners are highlighted. Diamonds freeze on the reels Fill all four corners with diamonds and the reels expand. Again, the corners are marked, and you want to get a diamond in each one. Keep going and you might grow the grid to its largest point of eight by four.

If new diamonds appear in the grid during respins, the respins counter resets to three. The only time they will not reset is once the grid is as large as it gets. Each diamond is given a value of up to 250x and awarded to you.

When you play for real money, you might see the words “Mini,” “Minor,” “Major,” or “Grand” instead of a multiplier. You win the corresponding jackpot in that case.

The Skull Scatter does more for you than cash payouts. Three or more also trigger the free spins bonus round. Win six free spins where extra diamonds, Senor Skeletons, and Skulls appear on the reels.

The Jackpot Diamond bonus is the best reason to spin the reels. Even if you don’t win one of the jackpots, you’ll walk away with hundreds or thousands of dollars. Between that, the regular payouts, and the free spins bonus, Diamond Fiesta pokies is a game you don’t want to miss.